In our last blog we had announced a rewrite of zenoh in Rust. The wrote the first version of zenoh in OCaml, a super-neat ML-derived functional programming language. OCaml allowed us to experiment very quickly and have good performances. Yet, one of the major feedback we were receiving from the community was that few people knew this programming language and this was limiting contributions. Beside, we had the desire to make zenoh even faster and smaller. One obvious choice would have been to write the new version in C/C++, yet something we did not want to loose were the safety properties we enjoyed with OCaml. Additionally, if we had to leave our beloved OCaml, we did not want to completely give away high level abstractions. We also wanted to avoid languages that had a heavy runtime and a garbage collector. We had already looked at Rust back in 2015, but at the point we did not feel it was the right choice for us. The improvements introduced in the programming language with the 2018 edition along with the introduction at a language level async make Rust a perfect choice for zenoh.

As we were going for a rewrite, we took this opportunity to leverage the experience, user feedback and lesson learned from the first version of zenoh. We did some improvements at the protocol level as well as some reorganisation. The resulting stack is represented in the diagram below. 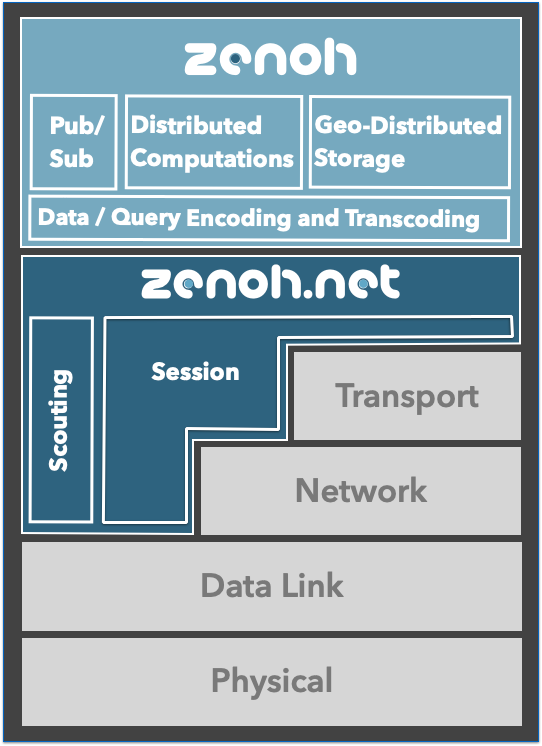 As you can see from this diagram, now zenoh is organised as two layers.

Implements a networking layer capable of running above a Data Link, Network or Transport Layer. zenoh-net provides primitives for efficient pub/sub and distributed queries. It supports fragmentation and ordered reliable delivery and provides a pluggable scouting abstraction for discovery. zenoh-net defines and builds upon a session protocol that provides abstractions for ordered best effort and reliable channels with unlimited MTU that are independent of the underlying layer.

zenoh-net supports peer-to-peer and routed communication as well as push and pull pub/sub along.

The zenoh layer provides a high level API for pub/sub and distributed queries. It deals with data representation encoding and transcoding and provides an implementation of geo-distributed storage and distributed computed values. zenoh natively supports a series of data encoding, such as JSON, Properties, Relational, Raw, etc., along with transcoding across supported formats. It also defines a canonical query syntax based on URIs syntax. The zenoh layer also provides a storage back-end plug-in API to ease the integration of third parties storage technologies. Currently supported storage back-ends are Memory, MySQL, MariaDB, PostgreSQL, SQLite and InfluxDB By default the Geo-Distributed Storages work under eventual consistency. Stronger consistency can be implemented by user leveraging Quorum Mechanism

The upcoming version of zenoh comes with a few improvements and some new features. Specifically, you will see:

Protocols improvements. We have reorganised the protocol to make it even simpler to port zenoh to different kinds of networks while exploiting network specific features. We have also added the ability to carry user provided attachments with both data and queries. These attachments can be used by zenoh applications to either extend the protocol, or for instance add user level security.

Generalised Peer-to-Peer and Client Communication. In the upcoming version of zenoh an application can decide at runtime to behave like a peer or a client. Peers route information between themselves and can also route on behalf of clients – in other terms peers can behave like routers. Peers-to-peer communication is supported for arbitrary connectivity graphs and supports cliques as a special case.

Closure-based Discovery. Discovery in zenoh is supported by the scouting protocol, in order to ease the deployment of system that wants to leverage a clique connectivity, for cases in which multicast is not avaiable, or desirable, we support now a clousure-based discovery. In other terms starting from a single peer, we can discover its closure, or in other terms the peers that can be reached directly or indirectly from this starting point.

Region-Based Routing The new version of zenoh supports region-based routing. As depicted in the diagram below, this really means two things, (1) routing information required to build and maintain our routing tables scales with the size of the region, and (2) each region can decide wether to route over an arbitrary connectivity graph of assume a clique. This approach to routing will greatly improve scalability and performance by allowing to use the most appropriate routing technique within a region. 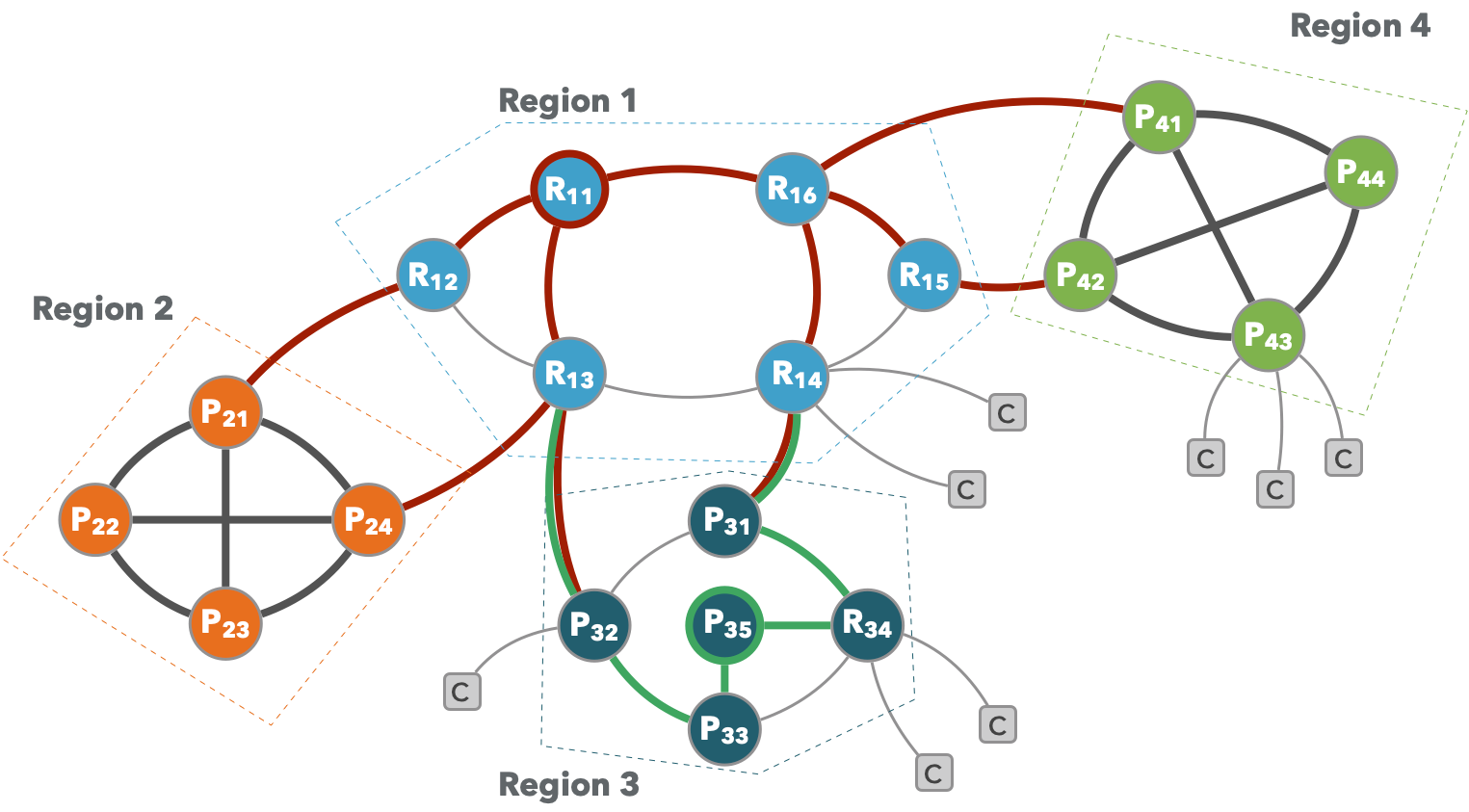 The Zenoh distribution includes simple tests to check the performance. To build and run these tests just follow the instruction below:

When running these tests on a Linux Laptop with an Intel Core i7 we get the results displayed below. As you can read from the graph the 1Gbps mark is reached already for messages with a payload of just 128 bytes. 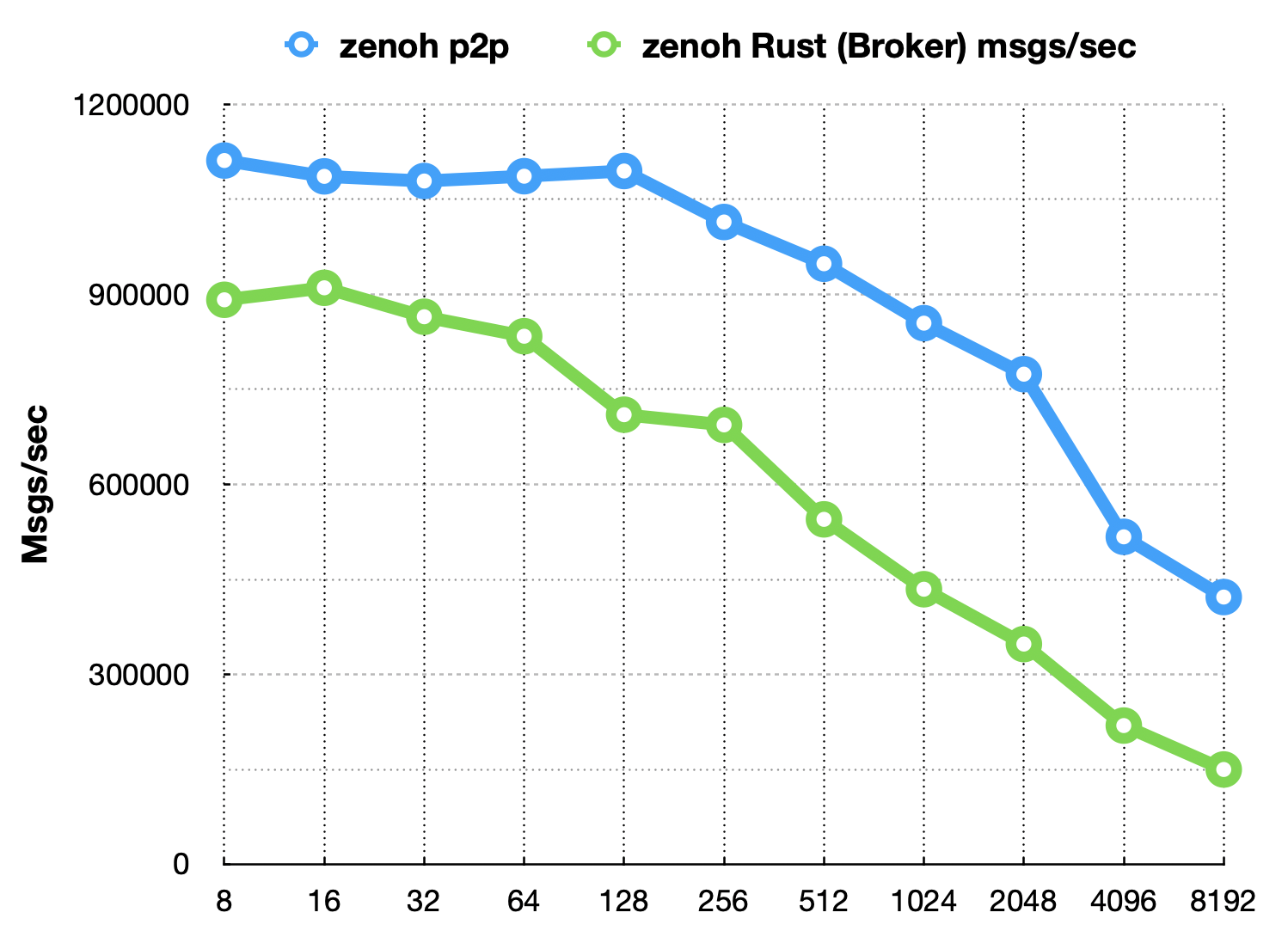 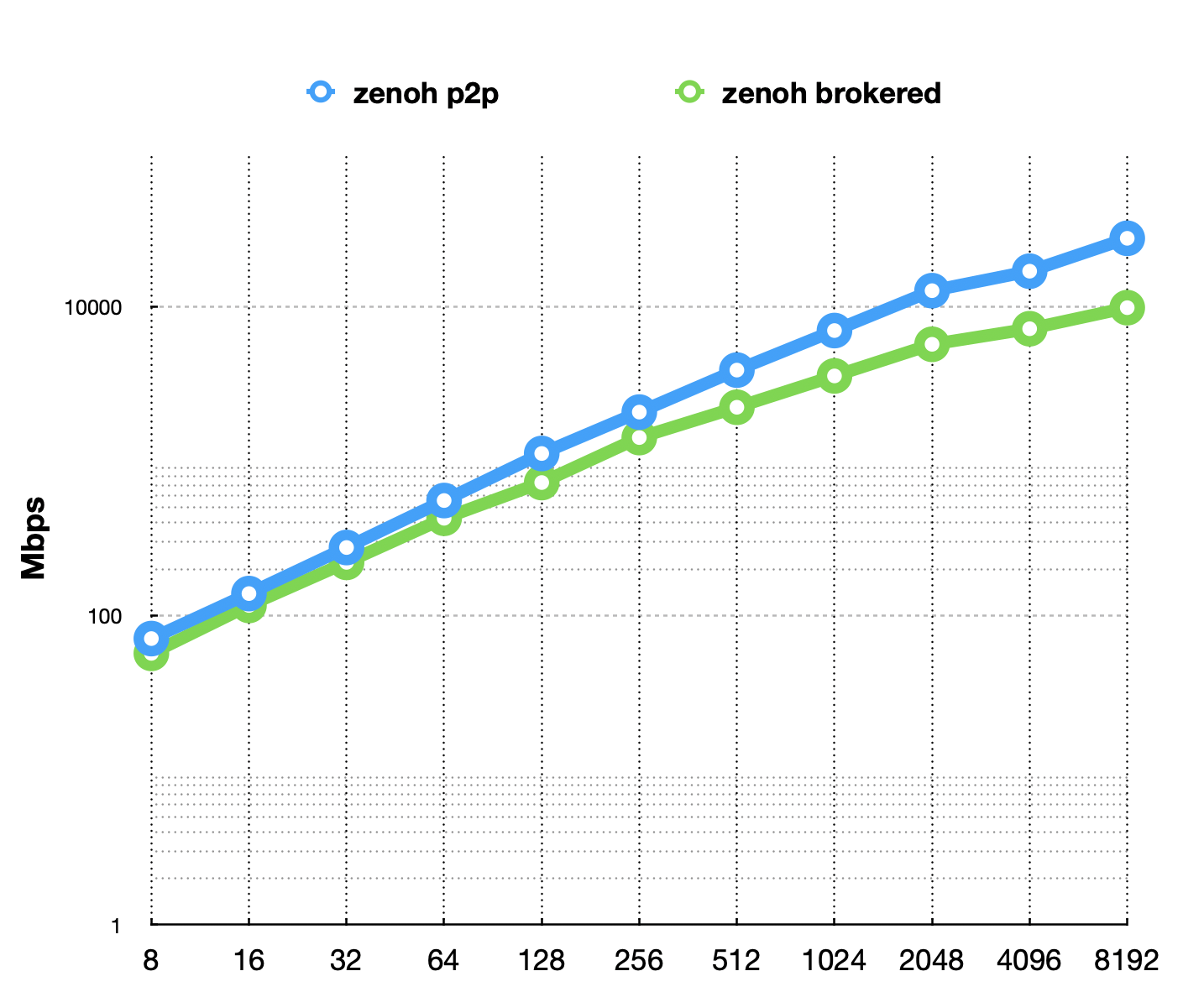 We have made good progress toward making the Rust of zenoh available. You can already start experimenting with the rust-master branch, but the good news is that by the end of July we should have the bulk of features in place. You can check-out the roadmap to see our progress as well as comment on which features you’d like to see next.

Next up: A Year Full of Zenoh