Providing many to many reliable communications over a wide area network is challenging. This may even be an understatement, as theoretically, even simple point to point reliable communication over asynchronous channels requires either infinite amount of memory or giving up progress… but guess what, many real systems can’t afford neither of those restrictions. Thus, trade-offs need to be made regarding reliability for the system to work, scale smoothly and have sufficiently strong guarantees. System’s heterogeneity, with respect to network capabilities and nodes resources, has important consequences and requires proper strategies to avoid a slow node to impact the entire system.

zenoh provides different mechanisms to deal with these challenges. It allows users to clearly define the reliability semantics they need without bringing extra complexity.

The zenoh protocol is composed of two layers:

Consequently the reliability state maintained by each application is independent of the number of data producers and data subscribers hosted by the application.

As zenoh offers routed communication, a single data producer connected to a zenoh router can reliably send data to as many data consumers as needed while maintaining a single reliability state.

This strategy is highly scalable and offers a good level of reliability. No data samples are lost while the infrastructure is stable. If a zenoh router fails, the zenoh infrastructure will automatically adapt to the new topology (details will be provided in a future post). During the failover, data samples may be lost. As soon as the infrastructure re-stabilized, data is distributed reliably again.

With the default hop to hop reliability strategy data samples can be lost during topology changes. This is the price to pay for a good scalability but can be problematic for some systems. zenoh is designed to offer two stronger reliability strategies which are very briefly described here.

A reliability channel is established between each data producer/data consumer pair. This avoids sample loss even during topology changes but is less scalable and induces higher resource consumption on producers and consumers.

A reliability channel is established between the first zenoh router and the last zenoh router of each data route. This allows to relax pressure on producers and consumers by deporting this pressure to nearest infrastructure components.

In a reliable system, there is a constant trade-off between reliability, progress and memory consumption. Indeed a slow or non-responsive data consumer will force matching data producers to either:

A lot of technologies made opinionated choices to address this problem and applied predefined semantics on which users have very limited control. Those semantics may be good for some use cases and bad for others and you would often need a mix of different behaviors in the same system.

Part of the issue is a confusion between reliability and congestion control. zenoh clearly separates control over message resending, memory usage (buffering) and message dropping. 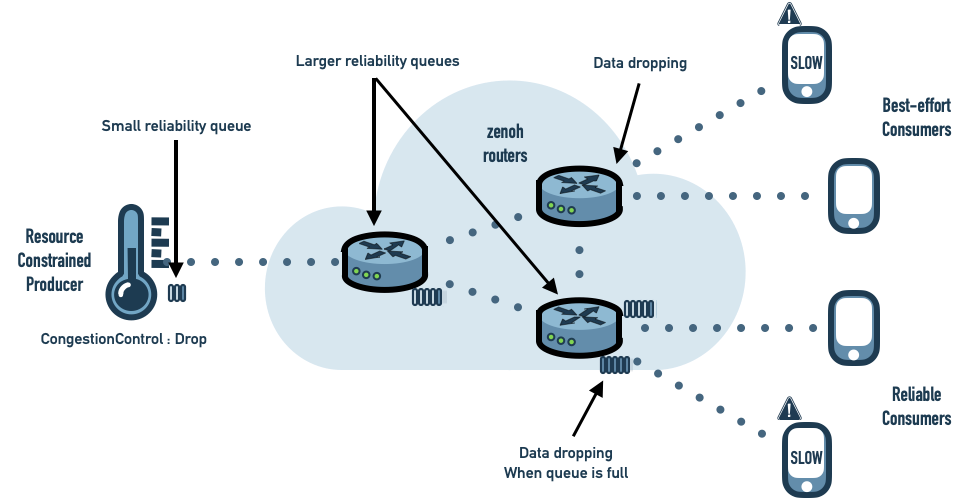 Show me Some Code

Here are examples of how reliability and congestion control can be configured using the zenoh Python API.

zenoh reliability is configured on the subscriber side as shown below:

zenoh congestion control is configured per sample as shown below:

zenoh provides different flavors of reliability and congestion control. It provides the level of control required to balance between application needs and system constraints, thus allowing the user to operate under the right trade-off between reliability, scalability, resource consumption and progress. Finally, each zenoh application and infrastructural node, i.e. zenoh routers, participates to the system with its own capacity and is well protected from structural or temporary asymmetries.

These are some of the key ingredients that make zenoh work well at scale, in dynamic and heterogeneous networks, while maintaining strong guarantees.

Next up: Integrating ROS2 with Eclipse zenoh