As we previously mentioned in this blog post, Zenoh is written in Rust and leverages the async features to achieve high performance and scalability. At the present stage, we rely on the async_std framework – a decision that we took after a careful performance evaluation of the frameworks available in late 2019. This framework has proven to be quite effective, allowing Zenoh to reach more than 4M msg/s with 8 bytes payload and over 45Gb/s with 1MiB payload while keeping latency of ~30µS.

However, async_std development seems to be stalling and the community appears to be moving towards other async frameworks, such as Tokio. As such, we decided to re-evaluate the major Rust async frameworks in order to assess the possibility to move to another framework without compromising our performances.

Preparation of the testing environment

The first step toward reproducible results and fair evaluation is a stable and dedicated environment. In other terms, in any benchmarking effort, it is essential to reduce the number of factors that may influence the results of our performance evaluation. This guide effectively summarizes how to properly setup a Linux environment and how to get consistent results. The second recommendation is to have a thorough read of “The Rust Performance Book”. If you, like us, are developing in Rust, we recommend you to go through it since we found it really insightful for what concerns performance tips and tricks along with profiling techniques in Rust. Another nice reference on how to write performant code in Rust is this one.

For such evaluation, we concentrate on Round Trip Time (RTT) by building a ping-pong application for each framework. This synthetic benchmark is essential for us as it gives a lower bound on the achievable latency as well as its behavior under “async contention”. The Round Trip Time (RTT) is the amount of time it takes for a message to be sent plus the amount of time it takes for the acknowledgment of that message being received.

The picture below illustrates the ping-pong application, and how the RTT is computed. 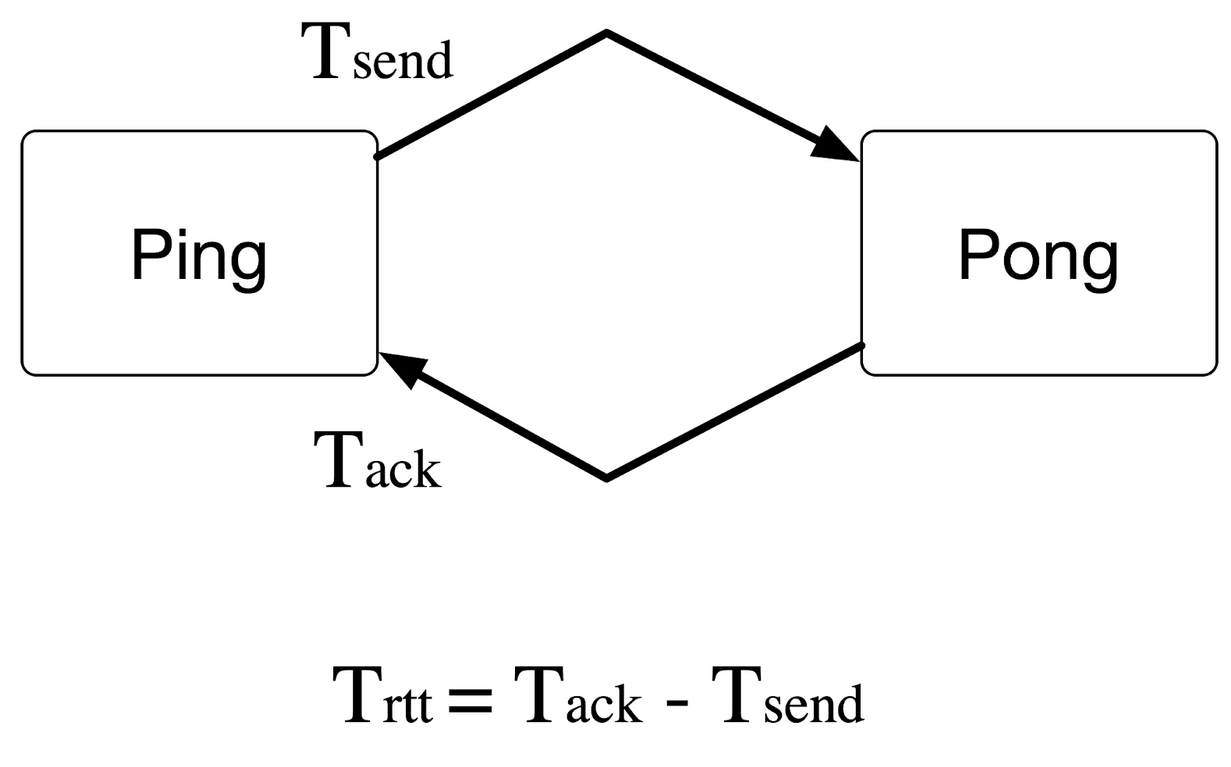 Our RTT tests are provided here. So, you can check what we actually used to get the RTT results and replicate it yourself!

Looking at the results

In the following, we are presenting the RTT results for all the frameworks under two different scenarios: over localhost and over the network.

In our first series of tests, the ping-pong application is executed on a single machine, leveraging only localhost communication.

To replicate these experiments, you can build and run the RTT test by following these instructions:

One very important aspect to mention is that RTT depends on the load of the system. As you can see from the figure below, as the number of messages per second increases, RTT decreases. This is due to the fact that when messages are sent at a low rate, the processes are more likely to be de-scheduled by the operating system. This operation adds additional latency since the processes need to be rescheduled when messages are sent and received. This is true for both the Rust code and the classical ping, which is reported as a reference baseline for RTT.

The x-axis of the figure below shows the number of messages that we configured to be sent in one second, from a single message to 1 million and beyond. The inf case represents the scenario where messages are sent back-to-back as fast as possible. In such a backlogged scenario, we can see that Rust latency is as little as 5 µs for the standard library. The payload size of each message is 64 bytes, the same as standard ICMP. 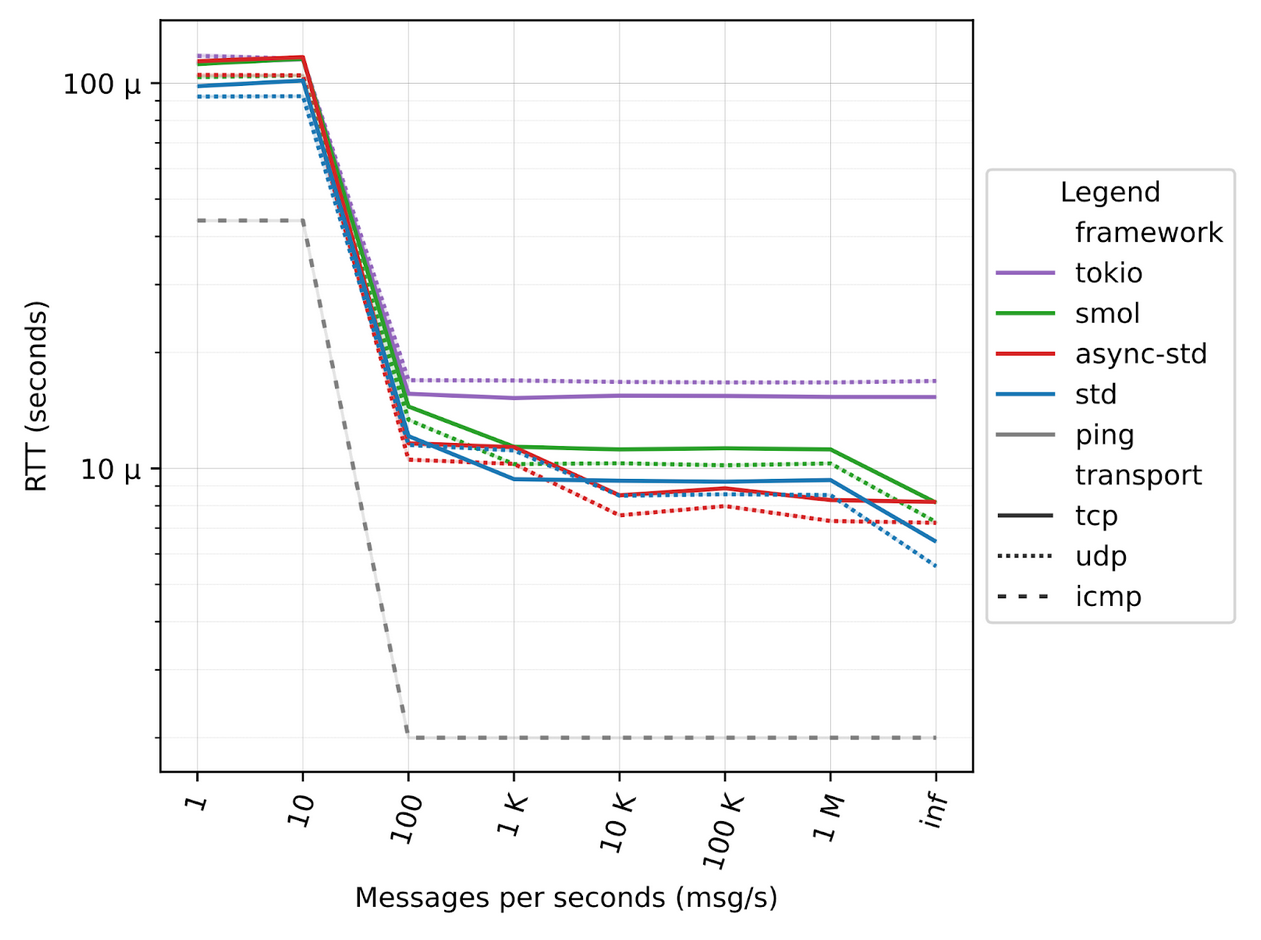 It is also interesting to see the behavior over a real physical network, as the asynchronous frameworks should take advantage of real blocking I/O operations, such as sending messages over the network. In this case, we used two workstations, one running the ping and the other one running the pong. 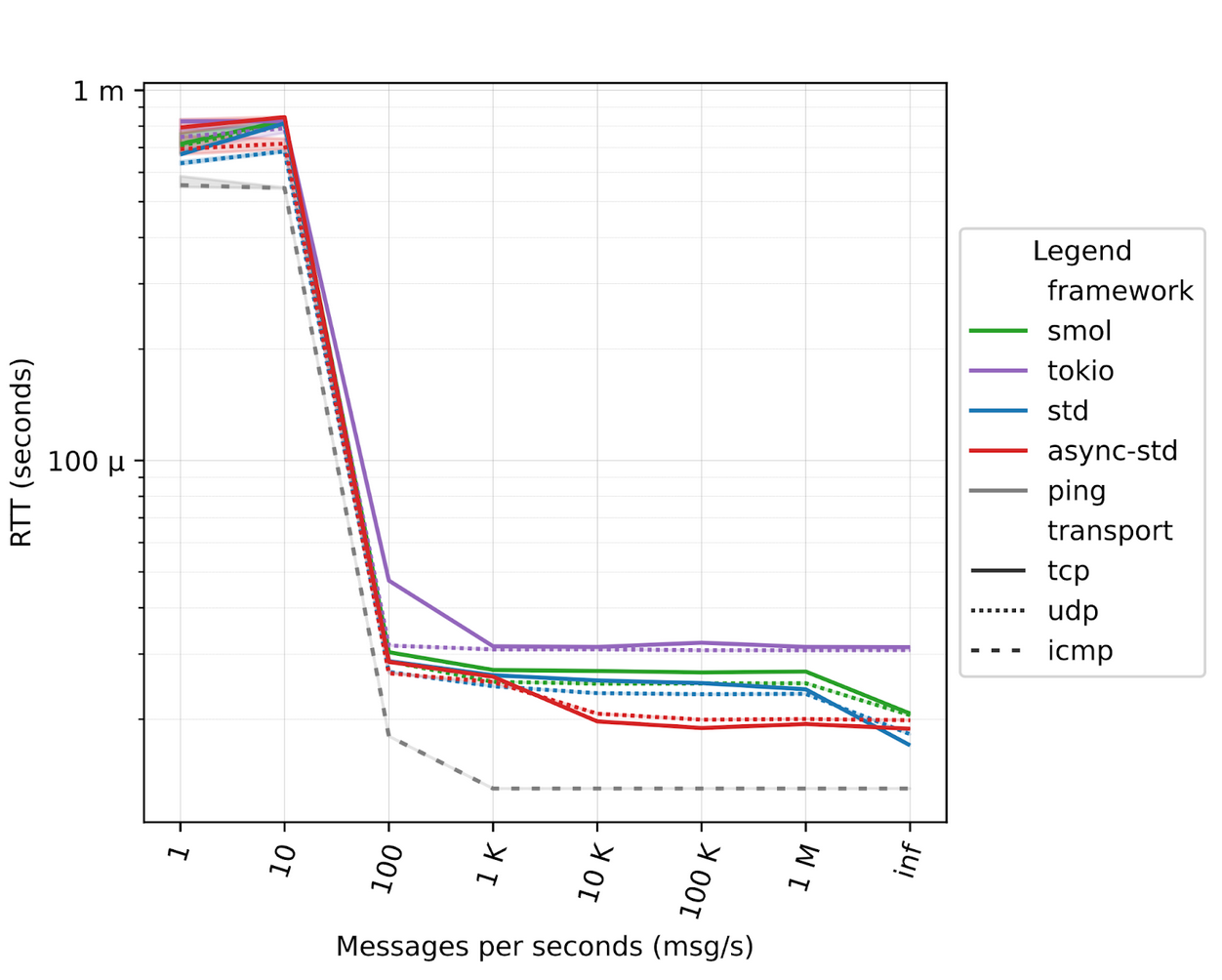 But Zenoh does not only send data, but it also has a set of CPU-bound tasks, like looking up a forwarding table, de/serializing messages, and so on. To this extent, it is interesting to validate how such frameworks perform when interleaving the I/O tasks with come computing-intensive tasks.

A Zenoh peer runs two separate tasks for each session with other Zenoh peers, so we modified the ping-pong applications to spawn a number of tasks that mimics those compute-intensive tasks. In our tests we range from 10 to 1000 tasks, mimicking from 5 to 500 “zenoh sessions”. Figures below illustrate the different results. 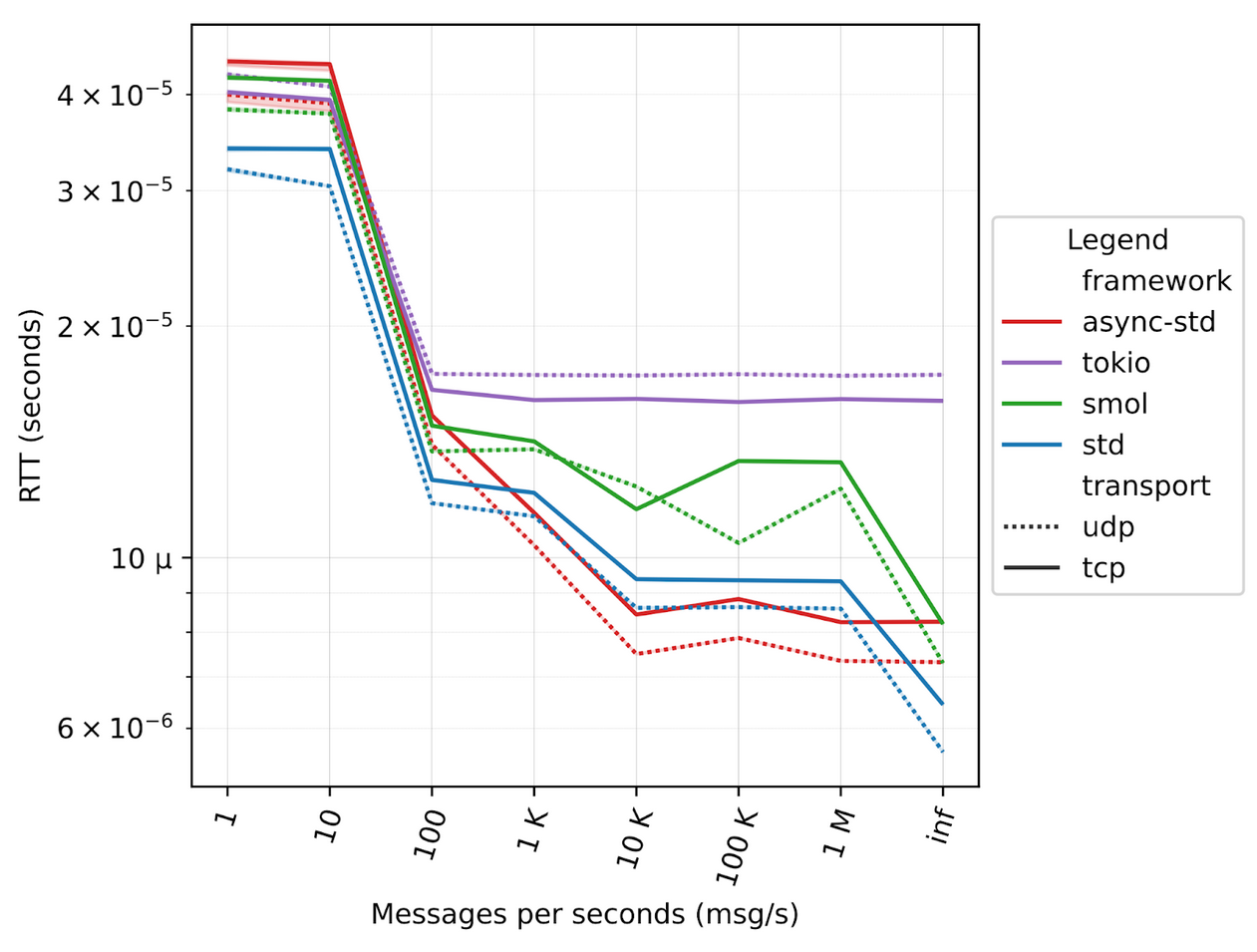 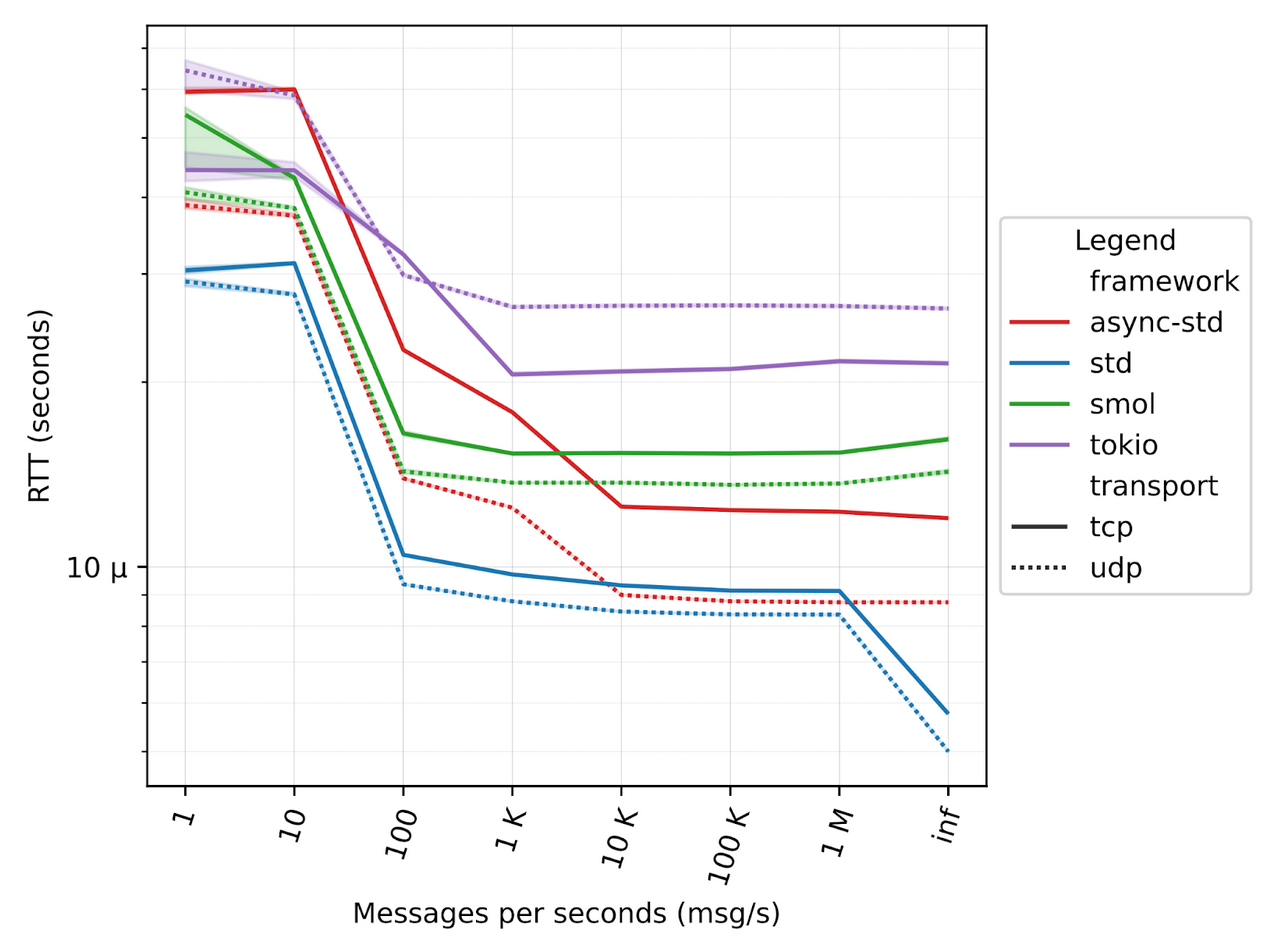 Over a 100GbE network

In this series of tests the ping and the pong applications are running on two different machines, leveraging the 100GbE network connectivity, varying the number of computing tasks. 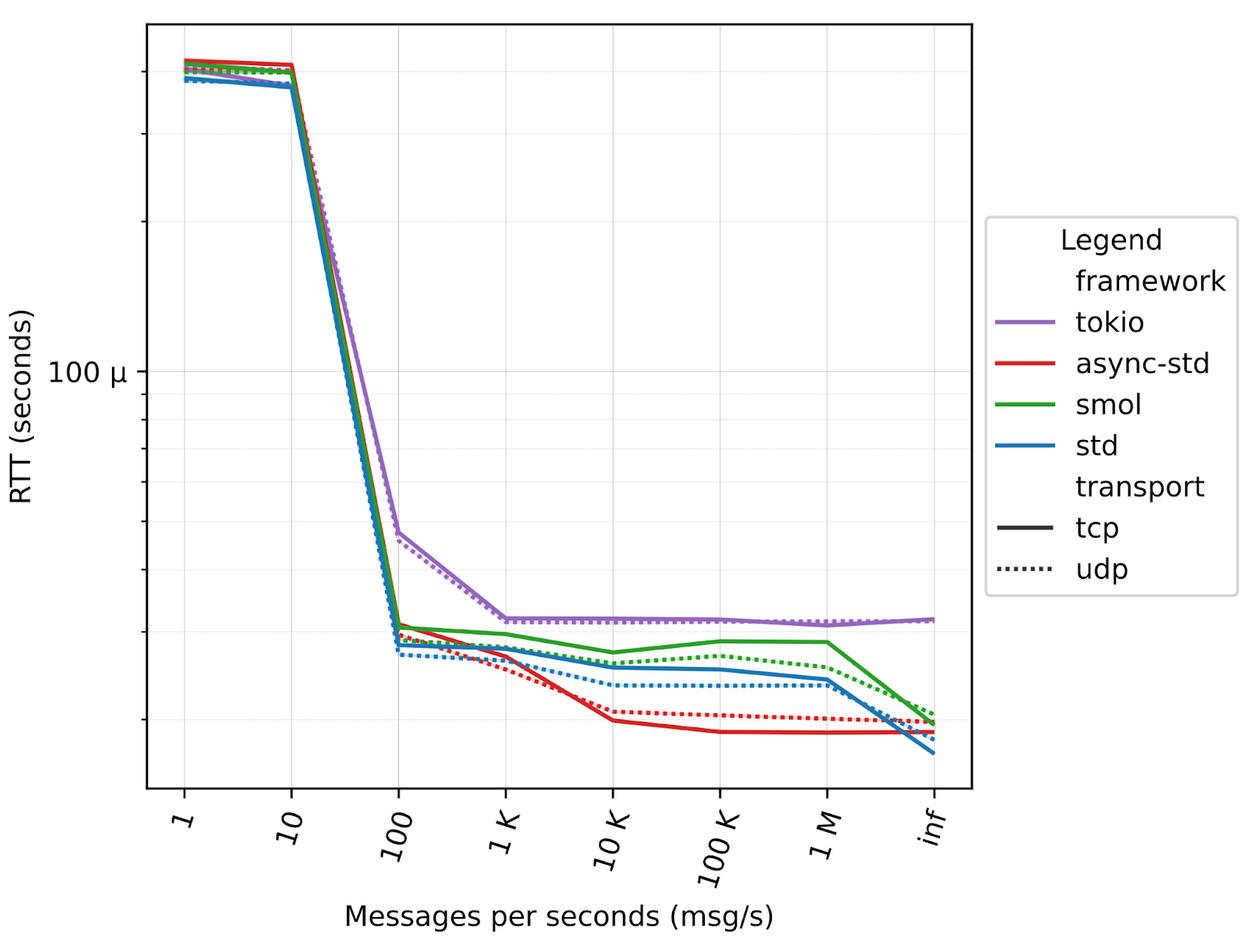 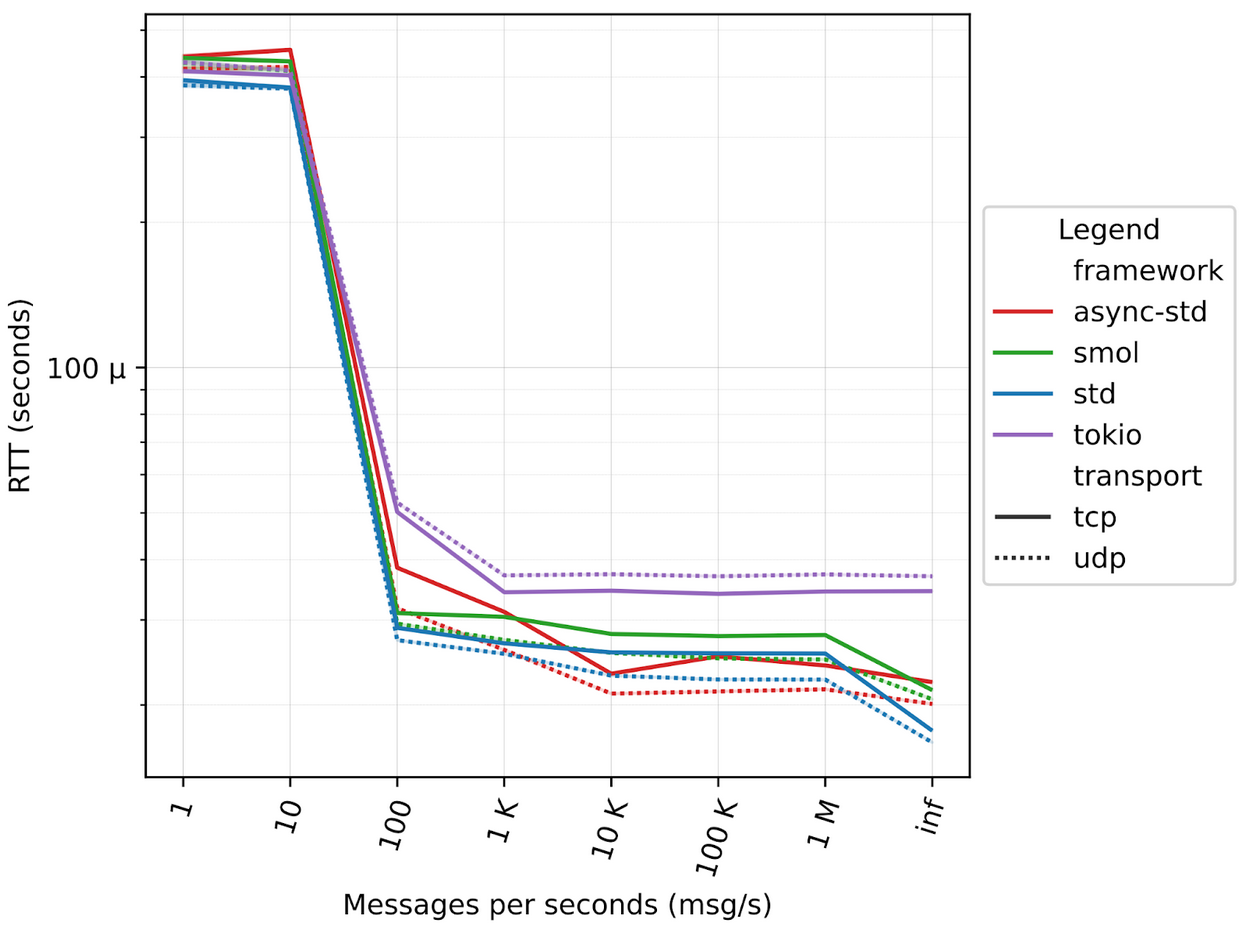 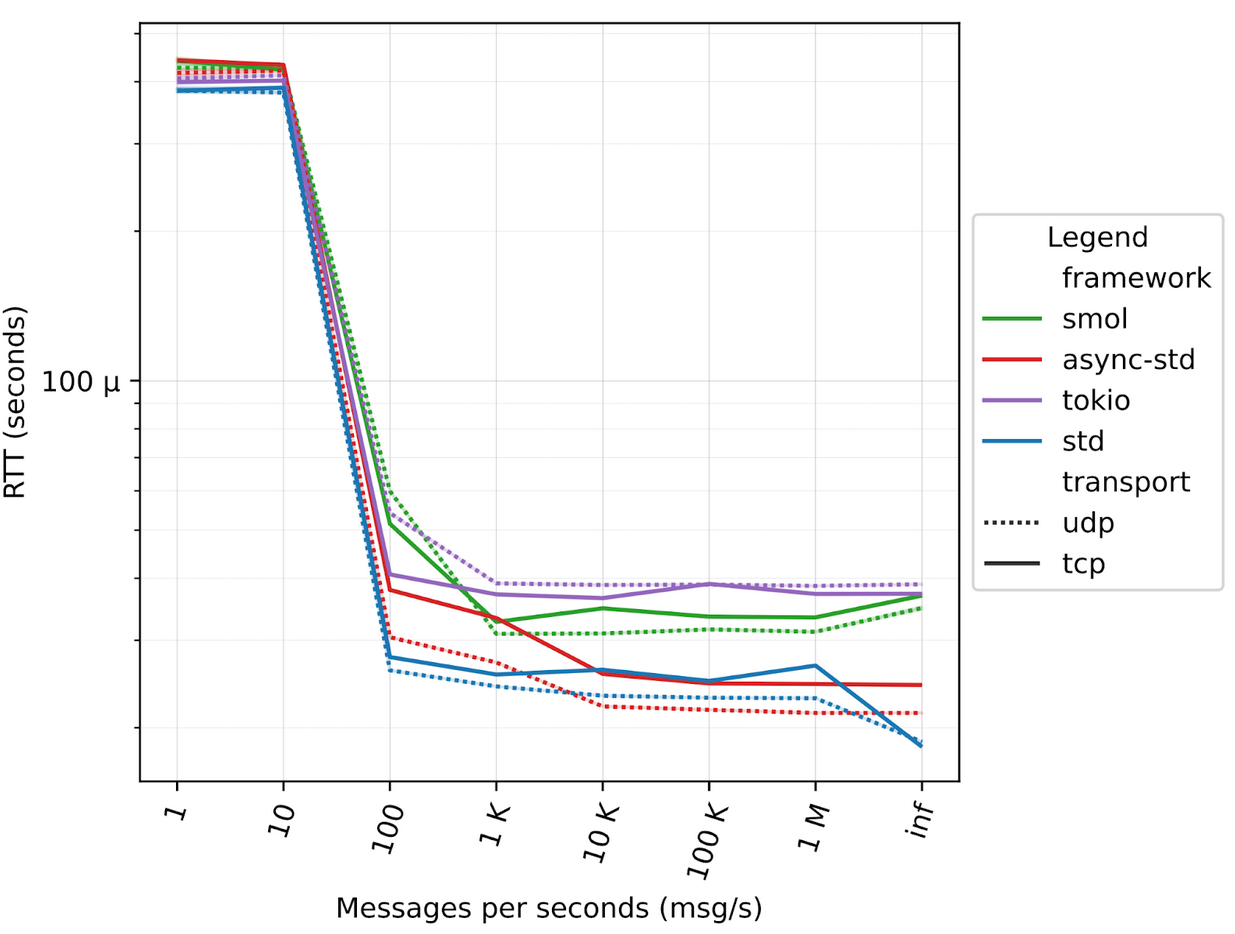 Our evaluation shows async_std and smol are quite close to the standard library and outperform it on some workloads. On the other hand, Tokio seems to reach very soon its limit ~18µs with 100 msg/s and it shows no differences between TCP and UDP. Additionally, Tokio seems to be adversely impacted by the CPU-bound (Rust) asynchronous tasks. Based on these results, we believe that we have no choice but remain on async-std. That said, it would be interesting to understand why Tokio exposes such behavior under contention and also to improve its raw performance to close the gap with async_std. As it stands, Tokio introduces 8µs additional latency in localhost and 10µs over the network.

Ideally, we would like to see one async framework becoming the “standard”, but to do so we can’t ignore raw performance. We look forward to engaging and working with the rest of the community to help make this happen.

Next up: Mobility, Latency and Energy saving